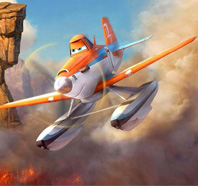 A while ago we spoke to you about “Planes”, a film that gave us a version of “cars” but set amongst the highways of the sky. Well, we’re back to talk about the sequel, which follows the good guy Dusty, who, on realizing his motor is damaged, drops out of the competition to move on to something more note-worthy: joining a fire rescue team who are trying to calm a giant forest fire. Dusty learns that this is the sort of thing that really makes someone a hero.

Some people considered the first film a little bland, and even too similar to “Cars”, or lacking action or excitement…the sequel redeems it, with new characters, a more risky venture and a moral to do with caring for our environment. It’s so different from the first film it’s impossible to know whether you’ll enjoy it unless you go and see it for yourself…or wait until a friend tells you about it.