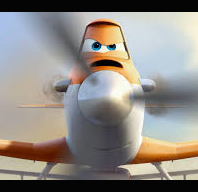 You may have noticed the airplanes in the movie Cars 2, which like the cars were also alive. Many of you, especially those who are more interested in wings than wheels, may have thought to yourselves, “wouldn’t it be awesome if there was movie like this with airplanes as the main characters”?

Movie makers at Disney had the same thought, and this month, you can see a movie featuring Dusty, a small plane whose big wish is to compete in a high flying competition. There’s just one problem: he’s afraid of heights! To get over his fear, he turns to a veteran navy aviator for help.

This movie is not a sequel, it’s what we call a spin off, a new story that takes place in a world that viewers are already familiar with. This isn’t a whole new world populated by airplanes we’re being introduced to, it’s the same world that Lightening McQueen lives in, but now we’re getting more of a bird’s eye view of it.

Another interesting fact about this film is that it wasn’t made by Pixar studios. But not to worry, this isn’t an imitation. The production crew of the original Cars films has stated that they are very pleased with the new movie.

In summary, if you liked Cars, you’ll love this movie, and if you’ve never seen the talking cars films, this one will introduce you to a whole new world.