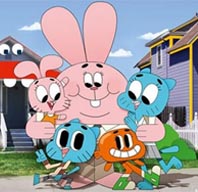 For those of you who don’t know about Gumball, I’ll tell you now that he is a very curious character: This is a blue cat who goes to school, his best friend is a mutant fish, his mom is a cat who sells rainbows, and his dad is a large pink rabbit. I almost forgot to mention that his little sister is a pink bunny, who happens to be the smartest in the family!

What’s more, his class mates are a robot, a ghost, a banana, a flower, a tyrannosaurus rex, and a bear, and to add to that he is in love with a peanut. I can’t forget to mention his teacher, who is a monkey who wears a flower dress.

Now you might think that sounds insane, but some believe it to be the best animated cartoon of recent times. Its fun for children of all ages, and a lot of people say that it shares similarities with the famous animated series The Simpsons, only a more humorous version for kids.

But how did this series come about? And who came up with such a strange combination of animals, pictures and toys? The idea came from the English animator Ben Bocquelet, who combined a variety of characters that he had originally created for an advertising production company, but all of which were disregarded. All he had to do then was create an environment where they could all show how different they are but make it user friendly to watch, and what better place than a school!

How we would have loved to have been present at the presentation for this series, in front of the companies’ board of directors, and watch how Bocquelet described each of his crazy and surprising characters. We know he must have done a good job because we can see the series in front of our eyes! The Adventures of Gumball is a series made up of 116 episodes, of which we have only seen 60 so far! It’s not hard to imagine why children, parents and grandparents love them so much.

What’s more, the story of Gumball also has a nice moral: you can achieve a lot with desire and imagination, and have fun at the same time!