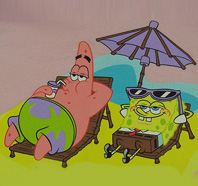 It’ll be hard for you not to know who we’re talking about: a yellow sponge who lives under the sea in a place called Bikini Bottom, his best friend and star of the sea goes by the name of Patrick, and his grumpy neighbor is known as Squidward. But, do you know how the character came about?

The idea for stories about creatures living under the sea was had been whirring about in Stephen Hillenburg’s head since 1984, when he was studying marine biology. In fact, he drew several comics with Bob as the main character, a real life sponge that lived under the sea, but eventually put this project aside to study animation.

In 1993, Hillenburg was already a professional in the animation industry, and was put in charge of the series “The modern life of Rocko”, in which the main character, a small kangaroo, had to capture a human-like fish. When the series was cancelled in 1996, Hillenburg went back to his original idea of a series featuring marine life behaving like humans. On consulting various colleagues, he slightly altered Bob so that he seemed more familiar and recognisable, just like a sponge you’d use in the bathtub.

He just needed to present the idea to the big names in television. As Hillenburg himself tells it, he really went the extra mile: dressed in a Hawaiian shirt, playing typical beach-side music… and with an aquarium in which he hang little sketches of each of his characters! The bosses fell completely in love with the idea, and allowed him to direct and produce the first episode, which would go on to achieve international acclaim.

So, what lesson can we learn from all this? That if we begin a project, we shouldn’t put it aside, we should have faith in it instead!