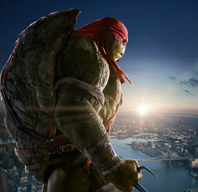 It's been some time since we've talked about the Teenage Mutant Ninja Turtles and where they came from. When we wrote about them, we asked ourselves if they would ever make a movie about them one day. Well, that day has come!

The new movie, starring these crazy turtles who are named after famous artists, has been a long time coming but now it's here—not without a little controversy to go with it. The most important was related to a change that goes directly to the origins of the turtles. In the original story, the turtles were the result of a strange mutation, but in the movie they were going to alter this. In the new story, the turtles would be aliens from another planet. However, due to the public outcry and a generally unfavorable reaction, the producers decided to keep the original story.

Another, much smaller, problem has arisen with people comparing the new film to the original movies from the 90's and, as my grandmother used to say, "a lot of water has flowed under the bridge since then". Many adults who saw the old TMNT movies remember how the turtles were actually actors in large rubber suits and computer effects weren't as common as they are today. They were also known for the corny humor while complicated camera shots and angles weren't a priority for the producers. Curiously, in the news we've read how movie fans haven't taken too well to the turtles being so "perfect" in their movements and expressions. This computer aided perfection has made some people uneasy in the same way that some of the newer robots look like and mimic actual people.

So, should you see this movie or not? Well, since most readers will have seen the older version including me, my answer to this question is highly subjective and personal. How about we leave it at that?