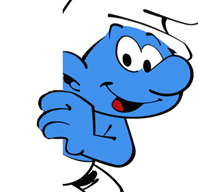 I'm sure you know those little blue creatures that live in mushrooms and who are known as "Smurfs". But if you have ever looked them up on the internet, more likely than not you have seen them called different names like Die Schlümpfe (in German), Los Pitufos (in Spanish) and Puffi (in Italian). But what made them receive the name we know them by? Their creator, the Belgian comic book artist Peyo, originally gave them the imaginary name of Schtroumpsf which is an imaginary French word. As the comic books were sold in different countries, they discovered that the name he gave them would be too difficult to pronounce in other languages (imagine saying The Schroumpsfs!) and odd sounding in some others. In the case of the Dutch, Peyo settled on the name Smurf and to English speaking ears that name sounded just fine. As mentioned earlier, in Spanish they are named Pitufos and how they acquired that name is rather interesting.

Like English speaking children, Spanish kids would have had a hard time pronouncing the Smurfs' original name. In Spain, Catalonian editor, Miguel Agustí, who brought them over from Belgium decided to give them a name a little more Spanish sounding. Using the name of a fairy from Catalonian folklore, the "Patufet", they got Pitufo.Now that we know where their name comes from in Spanish, we might think that the name "schroumpsf" originally came from Belgian folklore too. But that's not the case, it's actually much funnier.

One day Peyo was having lunch with fellow comic book artist, André Franqui (creator of Spirou & Fantasio) and suddenly, in the middle of eating, his mind went blank and he couldn't remember the name for salt. Saying the first thing that came to mind, he asked his friend to "pass the Schroumpsf!" Playing along, Franquin began to call everything by that name and from there these little blue creatures got their name and their particular manner of speaking: frequently using the word "smurf" in a variety of ways and meanings. One example of smurfspeak would be "Our village has been Smurfed by a smurf that smurfs smurf".

The idea of some mischievous fairies speaking in such a peculiar way was already brewing in the mind of Peyo when he had that fortuitous lunch with his friend and not long after, in 1958, he included these smurfs as secondary characters in one of the adventures of Johan and Peewit (another comic created by Peyo). The public reacted positively to these new characters, but everyone was asking why were they blue? Peyo's answer to these questions was very simple and practical from a cartoonist's point of view: "If they were green they would have gotten lost in the vegetation. If they were red they would have stood out too much. If they were Yellow they would have been too strange, so the only color left was blue."

Starting in 1959, they would begin to have their own adventures and so it was necessary for each smurf to have their own personality. Progressively, characters began to appear like Papa Smurf, Brainy Smurf, Hefty Smurf, Grouchy Smurf and Smurfette until a whole village Smurfs was created.

The Smurfs have since become tremendously famous, mainly due to their animated television series that was broadcast from 1981 to 1990. One thing we remember most from the series is the theme song that we've all surely heard before. Another interesting thing about the series is that it was made by the same people that made Scooby Doo.

These cartoons can now be seen as reruns on different channels and the sales of their DVD's continue to make these blue characters known to people of all ages: grandparents, children, grandchildren and everyone in between. What a great result thanks to a completely random and absent-minded moment!