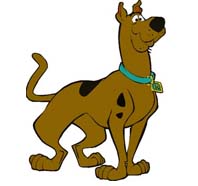 A dog is supposed to be brave and be willing to sacrifice for his owner; even more when it is the size of a Great Dane. But this is not what happens to Scooby Doo, we all know that, big and small. Scooby seems to worry more about pigging out on food with his friend Shaggy and, when he sees a monster or a ghost that is going to scare his friends, he simply runs away.

But he is lucky: there is always something that helps him discover a mystery or defeating a villain. Whether it is an opportunistic fall or a stumble at the right moment, he always unveils the villains in disguise and ends up being a hero. And we assume that what Scooby wants to tell us is that there is nothing to fear, that ghosts don't exist and that evil is so clumsy that can be defeated by something as simple as a slip. Who would have said that this funny and goofy dog would lecture us? And the thing is that he has been doing so since 1969.

Scooby and its message were born after a "crisis" in the TV cartoon world. The parents of the times considered that the series that their children watched were too violent, so they complained to many channels and producers, one of them the famous Hanna-Barbera (creator of "The Flintstones", "Wacky races" or "The Yogi Bear Show"). After the complaint, the producers decided to change their series radically, and create less violent products that also attracted young people.

One of their formulas would be creating cartoon series that showed the adventures of a pop music band. You surely have heard the song "Sugar", from "The Archies" (if not, ask your parents). Well, The Archies were a cartoon band. Their success made Hanna-Barbera take the idea and add a "peculiar touch" to it: the band would solve mysteries in between concerts.

So the writers Joe Ruby and Ken Spears, and the artist Iwao Takamoto got to work. It was clear that the band would need a dog... that should play bongos! But they weren't sure about neither its breed nor its name: at first, it was supposed to be called "Too Much", and was going to be a sort of poodle. But that didn't convince the animators or the producers: ones saw its behaviour very strange, others thought the name had no personality, and the animators were afraid of taking too long drawing a spongy hairy poodle.

Luck wanted Iwao Takamoto to be friends with a Great Dane breeder: they are dogs with clear features, very defined, and have short hair, what makes them perfect to be drawn with a few lines. Equally, fortune appeared to Fred Silverman, producer of the channel on which the Hanna-Barbera cartoons were shown: listening to a Frank Sinatra song, he realized that the singer started humming "Doobie Doobie Doo", the expression seemed funny to him and proposed the name to the series writers, who modified the humming to sound more like a first name.

After those two lucky strikes, the dog of the band ends up being the best defined character. A mystery-hunting dog would be adored by the children... so it was decided that the series would focus on him. The music band thing was forgotten and Scooby's group of friends ended up being a mystery hunting society.

And they were right. A proof of which is that in your family everyone knows this character; because 43 years is a very long time.