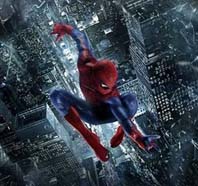 This is the fourth film starring the superhero with spider powers. Nevertheless, it is not the fourth sequel of the previously released films. Yes... it's a bit confusing, so let's explain it.

A couple of years ago, news came that "Spiderman 4"'s shooting was cancelled. Despite the success of the first 3 films, the fans would not enjoy a fourth one due to problems between the producers, the screenplay writers, and the director, gossip said. So it was decided to start all over again with Peter Parker's story.

Or, in other words, tell the sane story but in a different way: with a new actor, a different villain and even different plot approaches. For example, in this adventure Peter Parker has to discover what happened to his parents and why was he raised by his uncle Ben and his auntie May. He has also changed girlfriends: if we were used to the redhead Mary Jane Watson, this time his girlfriend is the blonde Gwen Stacy (who, by the way, was the hero's first girlfriend in the comic books). The villain in this film is "The Lizard" (another "classical" villain in the books). What doesn't change is the spider bite that turns Peter Parker in a hero, nor does the famous quote "with great power comes great responsibility".

Will this version be better or worse than the previous ones? We don't know. Let's just leave it in different, like when a friend tells us his version of what happened one day during recess. It is very possible also that the charm of this movie lies in comparing it with previous films. We are not going to criticise "remaking what's been already made" either, and even less so with superhero films: in the end, the same thing happened to Batman and the new films are much better than the previous ones. Let's see what happens to the "wall crawler".