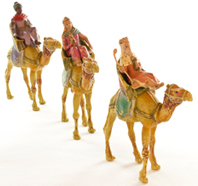 Every year the Magic Kings bring us presents, sweets, coal… and they’ve been doing it for a long time. But even though they are well known, there are things about them that we still don’t know. We’re going to tell you about some of them.

Until the sixth century it was not known that there were three Magic Kings called Melchoir, Caspar and Balthazar. Oddly, we don’t know from a text or a book, but from a mosaic of the Bizantine crhuch of San Apolinar el Nuevo, in Ravenna (Italy). We don’t know who made the mosaic, nor how the names of the kings came to be known.

Anyway…now that we’re talking about their names and how many there were, we’re going to tell you that, according to some authors, there was a fourth magic King called Artaban, who carried jewels and got lost on the way. He arrived in Bethlehem late, but could save a child of one of Herod’s soldiers by offering jewels in exchange for his life.

Something we’ve read which really got our attention is that Their Majesties didn’t start to receive letters until the nineteen century. We guess that before they decided what to give, but when the population crew the began needing “suggestions” from the children… and sometimes their parents.

We shan’t tell you more since we don’t want to reveal more secrets than necessary!