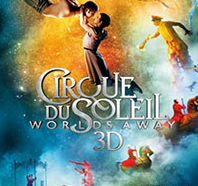 Along with many others, we know that the performances of Cirque de Soleil are fantastic, but we have never been able to see one of them: we don’t have enough time or money to go or the show is too far away. But this month, if anybody doesn’t get to see the Cirque du Soleil will be because they don’t want to. This is because the famous acrobats are starring in a film and for the price of a cinema ticket you can go to one of their shows!

This film, “Worlds Away” is not an adaptation of one of their performances, but something completely new. It tells the story of a pair of lovers who become separated. From this moment they have to traverse numerous fantastical worlds in order to find each other again. In each one of these worlds the members of the circus show carry out different acrobatics and perform various roles.

We are sure that you will feel that, either way, it is not the same seeing the acts on the big screen as it would be in person. But what if we told you that you can practically jump and dance along with the artists? The film is made in 3D, but not in just any 3D: the producer of the film is none other than James Cameron (the director of “Avatar”) so you can rest assured that all of the details, the definition and the technical elements will be in good hands.

The director of the film has also had his fair share of successes. He is Andrew Adamson, director of the first two Shrek films and the Chronicles of Narnia, so you needn’t worry that the storyline might get lost in amongst the somersaults, leaps and pirouettes.

In conclusion, you should make sure that you go to see this film. You will give you enjoyment and amazement in equal measure. The only bad thing is that, upon leaving the cinema, the “normal” world may seem a little uninspiring. But anyway, we will each send you some magic wishes in order to make up for it.