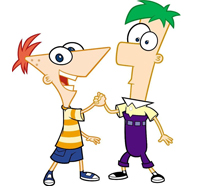 These two clever half brothers have become a sensation: their strange sense of humour, their inventiveness, their attitude when faced with problems – and even their choice of pet – is recognized throughout the world.

Their creators, Dan Povenmire and Jeff “Swampy” Marsh, came up with the concept for the series back in 1990. It is all thanks to the personal experiences of Povenmire: we aren’t saying that he built a rollercoaster in one day, that his sister was always trying to tell on him or that he had a platypus for a pet, but that when he was younger and his mother told him that he should make the most of every day of his summer holidays he began to make homemade films.

But, did you know that we nearly never got to know Phineas and Ferb? Provenmire and Marshwent to various TV channels and producers (for example, Cartoon Network, Fox Kids or Nickelodeon) with their project, but nobody wanted it. They thought the series was a little complicated for children.

The only company they had not presented their project to was Disney. It hadn’t even entered their head to do so as they thought that the programme didn’t quite fit in with the “personality” of the producer. The drawings were busy, cheeky and, in some cases, not very correct. Additionally, given that Povenmire was coming from a background of a series for adults, Family Guy, they thought that they would shut the door straight in their faces.

Only after a few years did they muster up the courage to go to the home of Mickey Mouse. Initially the idea wasn’t well received - again it was considered too complicated for children -. But, the Vice-president of the Disney Channel, who turned out to be a fan of Family Guy, thought that it was just the type of series they could be doing with. So, in 2006 they began to work together on the project that was finally aired in 2008.

From its premiere the series has had good reviews: people have called it “modern” and even “daring”, especially for their representation of the nature of the family of Phineas and Ferb (their parents had both previously been married to other people). Similarly it is also one of the few series that parents appear to enjoy just as much as their children: in fact its creators have insisted that it is truly a series “for all the family”.

There are even people who believe that part of the series’ success is due to something as simple as the principal characters being easy to draw. We are sure that you have alldone it at one time or another! A triangle is sufficient in order to draw Phineas’ head, a trapezium and a square for Ferb’s head and Perry the platypus is pretty much complete with a rectangle to which you add a round tail. Children can recreate them easily in their drawings, making them more appealing and well known to them.

When you think about it, it is probably the case that the success of the series is down to a combination of all of these elements: a groundbreaking idea with imaginative and active characters who are easy to draw and who every week embark on adventures that both children and adults will enjoy. However the best part of it all: the series is really good!