Why do we speak different Languages? 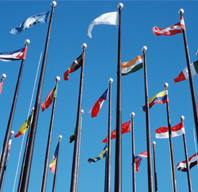 Surely you have asked yourself (or at least thought of it at one time or another) in one of your language classes: "If we are all the same, why do we speak languages that are so different?" To tell you the truth, this is a question that even the most distinguished academics are asking themselves. We don't know why with any certainty, but there are different theories that try to answer this question.

The most accepted theory states that very early in time, our ancestors lived in isolated groups with very little contact between them. (Remember that during this time there weren't any cars or other means of transportation and often these tribes lived hundreds of miles from one another.) As a matter of survival, the members of these tribes needed to agree on how to divide tasks, name tools and establish hunting strategies.

Since these tribes lived apart from one another, each group gave a different name to all of those things that were necessary for survival as well as things such as a simple pot, a spear, an axe and actions like to hunt, to pick (fruit), and to build. Also, we have to keep in mind that each community would have discovered different things at different times. For example, two communities could have discovered how to grow crops (at the same time even) but would have given this process a different name.

These early languages continued to evolve as these tribes began to organize themselves in more sophisticated ways such as building villages and cities. They would also have adopted words from other populations they traded with or conquered, enriching their vocabulary by doing so. However, if there were any natural barriers like water or mountains it would have been difficult to establish communication with other communities that could have been on the other side.

Today, if we can communicate with other people that live on the other side of the planet via internet, why don't we all speak the same language? There have been many attempts to create an international language but remember that these attempts have been fairly recent while the different languages that exist today have been around for much longer—for millennia in some instances. It's possible that in the future we will all speak one language, but until then…you can come to one of our language classes!

How can we help you?Speak with an advisor for personalized attention
Receive Information
“September Joke”
Back to school [Read joke]