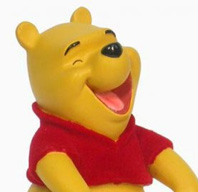 We all know that yellow bear that wears a red shirt, loves honey and goes by the name of Winnie the Pooh. But, did you know that this animated cartoon character comes from a series of books that were written in the 1920's and that these books were based on a real life bear cub? Here's the story behind Winnie the Pooh.

In 1914, veterinarian Harry Colebourn, who was also a lieutenant in the Royal Canadian Army, bought a black bear cub from a hunter that he called "Winnie" after the Canadian town of Winnipeg where he lived. Winnie was smuggled into England when Colebourn was shipped over during The Great War and he quickly became the regimental mascot of where Colebourn was based. When Colebourn received his orders to go to France, he gave Winnie to the London Zoo for safekeeping and it is there where Winnie would become famous for his docile nature and develop his love for condensed milk.

One of the families that came to visit Winnie was that of the writer Alan Alexander Milne. Milne's son, Christopher Robin, was so astounded by that bear cub that he decided to name his teddy bear after him. Milne was very amused when he discovered what his son did and in moment of inspiration, decided to write a story based on the adventures of his son and his stuffed animals. The books that were subsequently written found success quickly and this success was also aided by the popularity of the real Winnie.

Among his biggest fans were the daughters of the animator (whose name may sound familiar) Walt Disney. The famous cartoon movie mogul didn't think twice when he purchased the rights to Pooh and he would go on to produce many films featuring this leading bear. We're sure you've seen at least one!

Now you know: Inspiration for great things can come from anywhere. Wherever you go, keep your eyes open and let your imagination flow!

How can we help you?Speak with an advisor for personalized attention
Receive Information
“September Joke”
Back to school [Read joke]