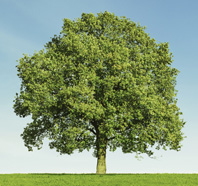 Everyone knows that leaves are green; this is something we all see every spring and every summer. Sometimes the leaves are greener or darker, but the majority of leaves are roughly the same color. Why is this? Who doesn’t love chilling in the shadow of an overgrown tree, having a quick nap or simply passing the time? But why exactly are trees always such a nice shade of green?

It’s because of a substance called chlorophyll, which converts light energy into chemical energy for the plant’s nutrients yet which also produces part of the oxygen we breathe. The strange thing is that chlorophyll converts every single color of light (which contains all the colors of the rainbow) into energy except for green; therefore instead of absorbing it, it reflects it. Isn’t it curious that leaves are the very color that they can’t take in?

Of course, chlorophyll isn’t only found in greenery, it’s also found in animals like coral and in several mollusks. It’s pretty surprising, but consider this one; do carnivorous plants exist? Nature can surprise us in many different ways.