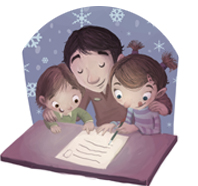 We all know 6th January is the Día de Reyes (Kings’ Day or Magic Kings); that Melchior, Caspar and Balthazar leave presents when we’re asleep; that the night before they follow a procession... but there are some things that we don’t know about this day, and we’re going to tell you about some of them here.

The custom of putting shoes out on balconies during the night of kings comes from the Netherlands. We don’t know for sure how it got to the other countries, but we do know that before they used to leave out socks. Perhaps it’s because more things can fit in a shoe or boot than a sock?

Día de Reyes is also celebrated in Latin America, the Philippines and some regions of France. One interesting fact is that 6th January is traditionally the day many countries take down their Christmas decorations.

Why do they leave coal to the naughty children? There are some who say it’s because it’s the “ugliest” thing that could be given, while others say it comes from the remains of the incense that the kings left to Jesus. Historians say it’s because in houses there used to be coal heaters, and giving coal was like saying that they weren’t giving any presents because sooner or later it would end up burning in the chimney.

But let’s move on to sweeter things… do you know why we eat roscón (a ring-shaped cake only eaten on Día de Reyes)? Tradition states that in the Middle Ages the “rey del haba” party was celebrated, in which the poorest child of the kingdom was chosen and the best presents were given to him or her on Día de Reyes. Families took up this tradition so that in each home was a “king” preparing a roscón in which a figure – or haba – was placed: the child who found the surprise haba from inside the cake had the honor of being at the head of the table.

Did you like these little facts? We hope so. You’ll soon see that one of the best days of year still has surprises in store.