How many stars are there in the universe? 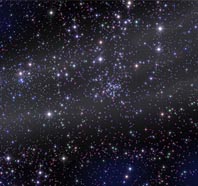 A science fiction novel (forgive us but we can’t remember exactly which one) said that there are as many stars in the universe as the amount of people that have lived during history. It is a nice idea, but it doesn’t seem like a definitive answer. However, counting starts is not impossible, and in fact, there is a belief that the universe has a total of 300.000.000.000.000.000.000.000.000 stars (300 trillion).

How have they arrived at this answer? Don’t think that several astronauts have been put into space to count stars in the same way that we count the coins in a piggy bank. Actually, they use a method that is a little more complicated, but a lot faster.

Astronomers count the stars of a precise part of the universe; for example our galaxy, and then multiply the result by the depth and dimensions of space. It would be like we wanted to know the amount of grains of sand there are on a beach; we would count the grains of sand in a bucket, and then multiply the amount of buckets that can fit along the length and width of the beach.

Of course this is an estimate and it may vary. In fact, the first estimate that was made with the system that we have told you about counted 10.000.000.000.000.000.000.000.000 stars. However, at this time, it was not known that some starts, called “the red dwarfs” had such a weak light that they were virtually invisible, so they re-counted them and arrived at the figure of 300 trillion.

Naturally this does not rule out the discovery of more stars in subsequent counts. Remember that in the stars are born and die constantly, and also many of those stars that we have seen may no longer exist. But that is another story.