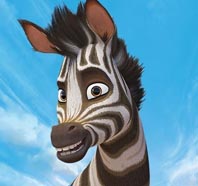 Khumba is an adventurous zebra with a certain peculiarity: he only has stripes on half of his body. This should not matter for him, but many zebras in his heard think that Khumba is cursed, so when a terrible drought comes, he gets all of the blame. Feeling guilty, even though it is not his fault, Khumba starts the journey to find the legendary well in which zebras can get their stripes so he can bring an end to the curse. In this adventure he will discover that things aren’t as they seem, not everything is black or white, and that the most unlikely companions can become very good friends.

This South African film has an interesting history. Do you know that it is dedicated to Reinhold Rau? This scientist dedicated much of his life to the “Quagga Project”, which consisted of the necessary investigations to recover the quagga, a time of extinct zebra…A zebra that only had stripes on half of its body! We don’t know if part of the money the film generates will go to the project, but it would be nice if it did. If we hear anything, we will tell you.