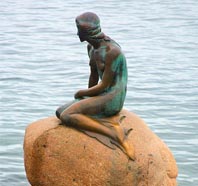 One of our editors remembers, with a lump in the throat, that time I saw “The Little Mermaid” and began to cry at the end. No, we are not talking about the Disney cartoon movie, but a Hans Christian Andersen adaptation that was filmed in 1987. This version was faithful to the original and ended with the poor mermaid becoming sea spray after learning that the prince would marry someone else.

The story was published in 1837, more than 150 years ago during a time when stories were written in a different way; many of them were not happy because they were not really aimed at both children and parents (remember there was no TV or radio at this time) and most of the tales were hiding a vital lessons: we do not know exactly which one was hidden in “The Little Mermaid” but we can imagine that it would want to tell us not to make hasty decisions about falling in love without thinking or considering what could go wrong.

It is likely that these stories have a bitter taste because of the life of the author: Hans Christian Andersen grew up in the home of a very poor family, and although he became a successful author in Europe, he was not recognized in his native Denmark for a long time. Some say that he was annoyed that he was only being remembered for his stories.

What might he think now, for example, with the Little Mermaid having become the most well-known monument in the city of Copenhagen? Surely he would feel proud, no matter what anyone else says.