Why do flowers grow in Spring? 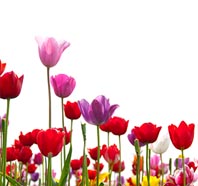 We all know that flowers appear in Spring and it is something that we see every year. But why does it happen exactly when Spring starts? Maybe it seems like a silly question, but believe us, it isn't. A lot of scientists have studied this and it wasn't until recently that they discovered the reason.

So they have discovered that the plants "decide" when to bloom judging by the length of the day and temperature. And how do they do this? Well through two proteins: the first is called FT, this "tells" the plant when it has to flourist (when there is the perfect combination of temperature and light); the second is called FD which tells the plant where it should appear (for example, at the end of which stem). Scientists have also found that for the flower to grow properly both proteins always have to work together. If FD is not combining with FT, there will be no flower.

A genetic aspect also comes into play as the FT protein reaches the ends of the stems where the FD is located, through a molecule, which thoughtfully and carefully silences the gene that is responsible for not allowing the flowers to bloom.