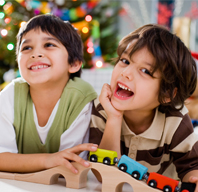 Parents often worry that their children, between the ages of 3 and 5 years, display overly possessive behavior. For example, they might become attached to a particular toy from nursery and then be reluctant to let any of the other children play with it.

It is comforting for some parents to know that, in most cases, this possessiveness is the result of young children’s conception of time, rather than an innate selfishness. They have seen the other children play with that toy and know that they have waited their turn; they believe in their young minds that they are now entitled to unlimited access to that toy for as long as they want. So, when it is the turn of the child no.2 to play with the toy, child no.1 feels as if his/her time wasn’t long enough. This happens to the best of us doesn’t it?

Even so, it doesn’t hurt to teach them that sharing is a good thing. So, how can we do this?

First of all, it’s important not to yell or punish them when they refuse to share; although it’s okay to try and intervene when a situation arises between your child and another who both take a liking to the same toy. It is important to remember that if you tell your child to share in an angry voice, then they will start to think of sharing in a negative way. Let your child see that sharing is good for everyone.It is important, however, to know why your child does not want to share.

Do not criticize their behavior nor command them to do something they do not want to do. Listen to your child’s reasons for not sharing before attempting to negotiate with them.

In order to demonstrate to your children and their friends that sharing can be fun, you can partake in organized group activities with them like doing a puzzle or drawing a picture.

If your child has friend’s coming over for tea, in order to prevent an outburst, you can ask your son or daughter ahead of time which toys they are willing to share and which toys they would rather keep in the cupboard.

We cannot stress this enough: sometimes the best way to solve a problem is by asking. Ah! And don’t forget that usually, children pick up habits from their parents.So, stop to think for a minute if you’ve done anything lately that could be perceived as selfish behavior. It’s important to practice what you preach so let someone have a lick of your ice cream, or lend your favorite shirt to a friend ...

Of course these tips are not infallible, but we think they may be useful. So without further ado, let’s share!

Of course, we speak as parents, but our tips are not foolproof because every child is different. But we want to put our two cents in the resolution of a problem that, lest we forget, has a solution if we apply ourselves.