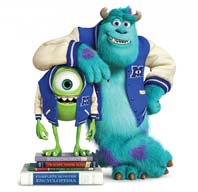 Sometimes when a movie becomes successful, the film-creator will create a follow-up work known as a sequel that picks up where the original work ended. Some screen-writers, however, choose to create a new work which explores the early lives of established characters called a prequel. In recent years, prequels have become increasingly popular. This concept can be a little confusing so we are going to use our “Movie of the Month”: Monsters University to explain a little more about how it works. This is the second part of Monsters, Inc. that tells us the story of Mike and Sully as students, before little Boo was born and they became friends.

Both monsters are college students preparing for the professional world of work. They are opposites in terms of their personalities and their individual outlooks on life; but something happens to turn them into the best of friends. During their adventures together, they encounter lots of other monsters that impact their lives in different ways.

It's been a while between Monsters Inc. (2001) and Monsters University (2013). This is partly because of – don’t tell anyone – some production problems. In 2005, a sequel was planned in which Mike and Sully’s friendship was put to the test when they got lost together in the human world. But complications arose: Pixar wouldn’t take on the responsibility of Monsters Inc. II. They wanted to “pass the buck” to a Disney Studio created especially for sequels such as Toy Story III and Finding Nemo II. Thus studio finally closed when Disney bought Pixar meaning that they had to handle the sequels themselves.

The screenplay for Monsters Inc. II that was left half-done for many months has finally been completed. Monsters University was due for release in November 2012 – you may even remember seeing a trailer on TV or a billboard at your local bus stop advertising its imminent release. Unfortunately though, something cropped up: that same month, the new Twilight movie was due to come out! Disney did not want to compete against one of the most awaited films of the year; so they decided to delay the release of Monsters University until summer 2013 … But it’s here at last and lots of people are looking forward to getting acquainted once again with two of the best monsters in the world! We’ll just have to see if the second movie is as good as the first!