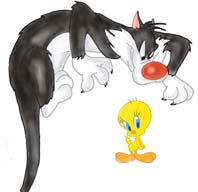 We’ve seen these two characters thousands of times on children’s television: Sylvester is always hunting Tweety, but things go wrong and finally the pussycat is defeated until the next adventure. Although every episode follows the same storyline, Sylvester always uses different methods of hunting and different jokes are told. With the exception of Tom & Jerry and Coyote and Road Runner, Sylvester & Tweety are arguably the most famous pair of cartoon characters of all “Hunter vs. Hunted” TV shows. Regardless of your personal favorite show, there’s no denying that all three are memorable in different ways. For example, Tom & Jerry have a mutual understanding that leads us as viewers to believe that they could be old friends; while the Coyote is distinguished in our minds for the crazy ways in which he tries to capture Road Runner. Sylvester on the other hand, represents the brutality of instinct that clashes with the natural cunning of Tweety who, despite popular belief owing to the long lashes and high pitched voice, is male.

These are the character qualities that have been conveyed to the public from the very first episodes; however, it may be said that viewers have warmed to the character of Sylvester over the years. Well ... that's what happened to us at least as we grew up watching these classic cartoons. Tweety Bird has changed aesthetically over the years too. For example, in the beginning, he never had his characteristic yellow plumage. He actually looked more like a newly hatched chick without any feathers at all.

The fictional canary used to be called "Orson" when the cartoon was first aired on TV and it was precisely this feature that angered Bob Clampett: Orson was also the name of a bird character from an earlier Clampett cartoon known as Wacky Blackout. Bob Clampett solved this problem by changing the name to Tweety to avoid confusion between the two bird characters. Tweet in English is onomatopoeia for the sound that a bird makes. Clampett liked to imitate small children, so he gave Tweety a high-pitched voice and the catch-phrase: “I Taut I Taw a Puddy Tat” (as in "I Thought I Saw a Pussy Cat"). The little bird needed a worthy rival, or maybe we should say an easy target for Tweety’s practical jokes. So, Clampett created the laughable character of Sylvester the Cat: disproportioned, always stumbling, with a strange way of speaking and a big red nose.

Is it just us, or does this terrible twosome remind you of the clever clown and the silly clown at the circus? The truth is that none of the creators or artists was inspired by the circus, but it's quite a coincidence. The two whimsical characters have starred in many cartoons, both together and by themselves, since the original was released in 1942, including “The Sylvester & Tweety Mysteries” which aired from 1995 to 2001. The subject of Sylvester without Tweety and vice-versa is an interesting one. When asked, most people will say that they remember more cartoons featuring Sylvester without Tweety than the other way around. This could be because, over the years, the viewers started to become fonder of the poor cat that never got his own way. If Sylvester was a real cat, it seems that people would be preparing him a basket with pillows to lie in…