The artistic development of the child 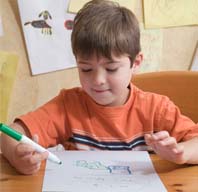 “Adults should not teach children how to paint, but learn from them”. This sentence is attributed to Picasso, and we can say that we couldn’t be more right. When a child paints, we see creativity and fantasy unleashed, even though when it is only about colouring a circle without going off the line.

For a child, drawing is more communication than art: he sees what surrounds him or what he imagines, and he puts it on paper for us to see how he expresses the world. This means that, as he grows up, that form of expression changes, and even learns from itself.

The curious thing is, even though every child has a different way of seeing things, the art they produce evolves in a similar way. In the 70s, the psychologist Rodha Kellog studied a large number of children’s drawings and came to the conclusion that there is an “artistic development” that can be divided into stages.

The first stage would be the scribbling stage: at age two, children draw lines that can seem meaningless for us. But Kellog distinguished several form and position patterns in the drawings that made her think that there is a certain intention of depicting reality.

At age three, the form drawing stage begins: during this stage, children draw six basic forms: circles, squares or rectangles, triangles, crosses, X letters and uneven shapes. They quickly move from this stage to the design stage, where those forms are joined to create an abstract artistic expression. Many parents belittle these drawings because they think that they don’t mean anything, but it is something much more complex: each shape can be a sensation or an emotion.

The pictorial stage starts around age 4 or 5 and lasts until age 7. They draw recognisable objects, but in a schematic way and without forming a scene. These objects often have a size that corresponds to real life size: a cup can be bigger than a person, for example.

From age 7 and until age 9, the schematic stage elongates: in this moment the two dimensions appear. An example of this is that a ground line or floor appears, on which the characters are standing; and also the size of the characters or the body parts that carry the action are exaggerated.

Realism starts at age 9. It is a detailed stage, with a greater visual accuracy, in which they can even criticize their past work due to its lack of “sense” or “proportion”. Some people believe that this last stage is actually an imposition of the parents and some teachers on the kids. It is believed that the lack of interest for art of many kids is precisely due to the obligation of sticking to reality and the disdain for “strange drawings” causes frustration on those kids that could be future artists.

We won’t dare giving an opinion, but we do invite the parents to appreciate their children’s artwork and even encourage them on their artistic endeavour. Because, what if we had a small Picasso in our home?