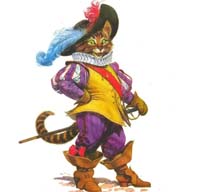 Even though we have been recently talked into thinking that the Puss in Boots has something to do with the Spain of capes and swords, it actually has Italian origins. Or at least it was an Italian author, Giambattista Basile, which included it in an anthology of traditional tales he put together in 1634. But the version we all know is the adaptation made in 1697 by the French writer Charles Perrault, and which is included in the book “Mother Goose Tales”.

The story is also a bit different from the one in the movies: the cat is the only legacy that Benjamin has of his father, the former mill man. The son is so poor that thinks about buying his inheritance to stop being hungry. But the animal turns out to be a “resource pet”: it puts some boots on and tells everyone that he is the butler of the Marquis of Carabas. We won’t spoil the story, but we will tell you that, after a couple of ruses and a confrontation with an ogre, the cat manages to turn his master into a rich nobleman.

At its time, the story of the Puss in Boots was not very well considered. It wasn’t a fable with an “adequate” moral message, due to the fact that the protagonist cheats and tricks others to get personal benefits, and doesn’t employ braveness or innocence to pursue a common good. We could say that the cat was a sort of “Jack Sparrow” of the time.

Nonetheless, the traditional tale has a lot of fans today. It is seen as an example for entrepreneurs or as a story that shows that the wit of the smallest creature can beat the force of the most ruthless. Others want to see a tribute to individualism: someone as strange as a cat with boots that is more able to manage himself with his own resources and triumph that, say, some dumb noblemen or a group of peasants intimidated by an ogre. And, lastly, we have to add those cat lovers who would love their pet to talk.

With so many interpretations and so many years, no wonder the tale has been made into a movie and a TV series in different occasions; there are even a couple operas on it. If you search the web, you will surely find some fragments.

So now you can imagine how different can the stories be from that in which Antonio Banderas dubbed the character. But, wait… they don’t necessarily have to be variations on the story of the same animal… can’t it be that all cats have a clever adventurer inside them?