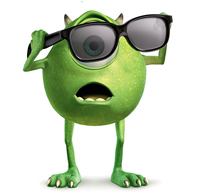 Some 11 years ago a curious film was premieres, Monsters Inc. It was the fourth movie of the animated movie production company Pixar, and we loved it because of its peculiar sense of humor when it showed us monsters behaving like regular human beings with their jobs, cities and even worries.

But what are we going to tell you that you don’t already know! You probably have the movie at home and have watched it many times. But, of course, as they usually say "a film is not the same on TV as is on a big cinema screen".

Maybe you were very little when it came out (or maybe you weren't even born) but the truth is that is caused awe to see the overgrown Sully and seeing Mike, whom you could almost feel you could touch… well, thanks to this new version it is now possible to "almost" touch it.

Because this new version is still the same movie with the same characters and same story, only this time it can be seen in 3D. Of course, this is already a reason for conflict. It is true that “Monsters, Inc.” is a great movie, one of those movies that is well told and pleases children and adults alike, but… is it necessary to take it to the theatres again? Those that are for this option argue that many children deserve watching it on a big screen, and those who say that the 3D technology enhances the film; those against say that the 3D technology is not so spectacular, and after a while our eyes get used to it, so this new premiere would only be a business move.

Here at the editorial office we have both opinions. So we let you decide because, in the end, it is all about a movie for kids. Do you want to see Sully, Mike and Boo’s adventures on the big screen or is it enough with your home DVD system?