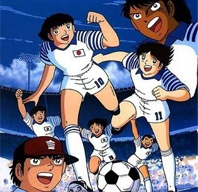 “There they go with the ball between their feet, and nobody can stop them”. If you ask any Spaniard between 28 and 34 years old how the song follows, they will sing the theme of a very famous cartoon series in Spain called “Campeones” (Champions) but, because of the tune’s chorus, the series ended up being known as “Oliver & Benji”.

The series told the story of Oliver Atom (midfielder) and Benji Price (goalkeeper), two Japanese boys that were passionate about soccer and tried to get their school’s team to the top of the different championships they played. It was a story of sportsmanship, self-overcoming and a certain exaggeration: we all remember the jumps that made the players depart from the field, the kicks that made the ball crush on the wall behind the goal, after breaking the net, those special kicks that seemed more like a karate move from Son Goku that a kick from Iniesta… and specially the size of the fields, which’s goals got lost in the horizon and, thus, running half the field took a whole episode (someone once calculated how long should that field be according to the time it took them running it, and the answer was 18 km long!).

The series was shown daily in Spain around 8:30 pm, and lasted for 128 episodes. What only a few followers of the series knew was that it came to our country late and incomplete –in Japan it was shown from 1983 to 1986, and had a second season, some special chapters and various films that weren’t shown in Spain-.

Also, very people know that the series was an adaptation of a successful manga (Japanese comic book) called “Captain Tsubasa”, created by Takahashi Yōichi and supported by the Japanese Soccer Association. The first part of it was published from 1981 to 1988; the second part from 1994 to 1997; the third part from 2001 to 2004; the fourth from 2005 to 2008, and a fifth one started being published in 2009. In it we see the characters go from school tournaments to the World Cup championship, going about different soccer leagues: Oliver would end up playing for Barça, and Mark Lenders, the bad one in the series, for Juventus.

The truth is that we hadn’t stopped to think about the series’ origins o where would its characters get to. Maybe it was because many of us wondered why some Japanese kids had English names. We can answer with another question: do you imagine a school kid saying to another “you have scored a goal like Ozora Tsubasa”? At that time we were not so familiar with Japanese language in Spain, and the series didn’t come to us straight from Japan, but from Italy, where they had dubbed it with English names to make it “cooler” and less hard to pronounce. Thus, the mentioned Ozora would be Oliver, Kojiro Hyuga transformed into “Mark Lenders” or “Steve Hyuga” in Latin America; and Genzo Wakabayashi was known as Benji Price.

Despite all the complications around the series’ adaptation, the truth is that the series is now part of the happy memories of a whole generation of Spaniards. It’s so much so, that, maybe because of the nostalgic trend in the world, a famous Spanish newspaper put out the series on DVD. By the way, one question: Do you think that if your parents or uncles watch the series again they will like it still? We believe that the fact that Spain has won a World Cup and two Eurocup championships is a milestone that will be hardly equalled by these two characters…