Who is the best magician in the world? 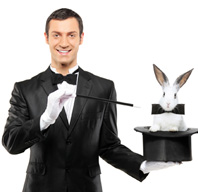 When we ask this question, the three wizards that surely spring to mind are Dumbledore, Merlin and Gandalf. But we want to make it realistic so, which out of the three previously mentioned magicians that we’ve seen in films and television programs could be considered the best? We asked around and four candidates have emerged. Of course, you can disagree with us if you like (and if you want you can tell us) here goes who we came up with.

Houdini: let us start with the mythical teacher from the end of the nineteenth century and the beginning of the twentieth, Harry Houdini. Born in Hungary and brought up in the United States, Houdini was the most famous magician of the century: he started off as an illusionist but ended up being an escapist. Besides disappearing card tricks, he was the first to escape from complicated ties (straitjackets, chains or handcuffs) in a dangerous environment (being locked in a trunk without air or in a water tank). It is difficult to know whether their impact has been exaggerated as practically no recordings were made of his shows, but his performances have always been described as breathtaking. He is considered the best by many magicians for being “the first”.

David Copperfield: if you ask your parents, they will tell you that David Seth Kotkin, nicknamed David Copperfield, is the best magician in the world. His tricks were extremely spectacular and very colorful: he made the Statue of Liberty disappear; he crossed the Great Wall of China; he escaped from Alcatraz prison and he levitated over the Gran Canyon, among other things. Millions of viewers tuned in to watch him on television and his live shows were the most successful. His supporters say he is "the best" because his tricks were simply breathtaking.

Dynamo: They say that he is more than a worthy successor of Copperfield. 30 years old Steven Frayne (or Dynamo as he is commonly known) has walked on water, put a cell phone inside a bottle of water without breaking it, pierced a window without making it shatter in front of hundreds of people, repaired a badly done tattoo with his bare hands and driven with his eyes closed and his ears covered. The fans of the young wizard think that the best is yet to come and say that, thanks to him, traditional magic has once again become a magnificent event.

Jasper Maskelyne: The name of this English wizard probably doesn’t ring any bells, but he has achieved some great things. During the Second World War, he and a group of soldiers managed to deceive the German army by making factories disappear, converting tanks into trucks and trucks into tanks, using lighting tricks to confuse bombers… and even changing the location of the city of Alexandria so that it wasn’t a target for bomb attacks! Their camouflage tricks were so effective that the British army has yet to reveal most of the secrets of their tricks. Maskelyne's followers consider him to be the best magician because with few resources and much imagination he managed to evade the most powerful and ruthless army of all time, saving many lives in the process.

These are the four that have received the most votes, but we do not want to end without acknowledging others that haven’t been mentioned. One of them is Canadian magician, Dai Vernon, the only wizard that managed to trick Harry Houdini; and Rene Lavand, an elderly and revered Argentinian magician who is able to do the impossible with his letters and only one hand, having lost the right one when he was nine years old.

Of course we invite you to watch the performances of these illusionists (most of them have videos on Youtube). You’ll be stunned by their incredible tricks.

How can we help you?Speak with an advisor for personalized attention
Receive Information
“May Joke”
Copying [Read joke]