Did dinosaurs have feathers? 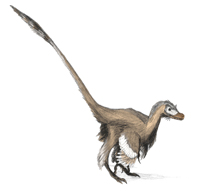 If you follow the news on the different discoveries of new dinosaur fossils or watch the latest documentaries on these animals you will know that every once in a while there is a new theory on these “terrible lizards”. For example, not so long ago we discovered that the closest relatives to dinosaurs would be birds and not lizards. Surprising, right?

Well, a new theory has come out now which, in case it was true, would change the image that we have of them. Some palaeontologists claim that dinosaurs had feathers on them!

Most of you probably know the Archeopteryx, a feathered dinosaur who is seen as a descendant of dinosaurs and an ancestor of birds, which lived about 150 years ago, in the Upper Jurassic. Well, not so long ago it was discovered in Germany the fossil of a new saurian which has been called Sciurumimus albersdoerferi; that fossil shows something similar to feathers. You may think that maybe he was a cousin of the Archeopteryx… well, not quite; the Sciurumimus lived some 30 million years before and was in no way related to the Archeopteryx.

Neither was the Beipiaosaurus inexpectus, which lived during the Cretaceous period and was more than 2 meters high. For quite some time, this was the biggest winged dinosaur…
..until in China they discovered several fossils of another dinosaur called Yutyrannus Huali. Even though this one didn’t have wings -strictly speaking- it was covered with a down similar to that of chickens. The most surprising fact is that this animal weighted 1500 kilograms, lived in the Cretaceous and was a relative of the dreaded Tyranosaurus Rex. What a chicken!

Since they are relatives, there has been some discussion on whether the Tyranosaurus Rex itself would have had a down. Do you imagine how different Jurassic Park would have been with a soft and fluffy T-Rex? Maybe it wouldn’t have been so frightening, or maybe even more.

Now that we mention that famous film, do you know that it has been discovered that one of the main species in the film had feathers very similar to those of birds? In the film they were by far the fiercest and most intelligent of them all… Yes! You’re right: the dreadful Velociraptor was covered in feathers. Well… not only him, but also all of its cousins of the order Dromeosaurius (which can be recognised by the long curved nail in their legs).

This doesn’t mean that all dinosaurs had them. For example, in 2007 they found the fossilized remains of a herbivore dinosaur, the Hadrosaur, in Dakota (USA), which even included part of its skin, which turned out to be scaly like that of a lizard.

So it is very possible that only some carnivore dinosaurs had feathers on them. Now that we know this, comes to mind the fascinating question of what color were those feathers; would it be discreet like a sparrow’s or colourful like a parrot’s? That is what’s so fascinating about the world of dinosaurs: there is always something new to learn.