Why blue is for boys and pink for girls? 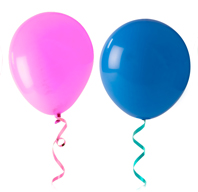 Since childhood, we are taught that blue is for boys and pink is for girls. We are used to seeing, for example, our mother give pink booties to our newborn cousin or our Grandma make a blue woolen outfit for our little brother. We assume that it has always been this way, but in fact it hasn’t always. Did you know that the color pink was originally the color of the boys and blue for girls? It is a curious tale… It seems that, long ago, the color red was strongly associated with royalty. Being the color of power, it was so expensive that it could only be afforded by kings. The princes were dressed in pink because it was a kind of a pale red. As the prince was the heir to the throne, the color red became the color pink.

The case of the blue for girls is even more curious. Blue is the color of the pure sky, so it was often used in paintings of the Virgin Mary. It was also the most expensive color after red. So, as the Virgin Mary was the example of virtue for girls, princesses wore the blue and it became the female color.

So far so good, up until now, the explanations seem quite logical. So what caused the two colors to switch meaning? It was relatively recently, after the First World War. Surely you know from your history classes that this war changed the world? Well it had a huge impact on the fashion world too: the bright red material used to make the military uniforms was considered too bright, so it was replaced by other darker colors.

From this moment on, red was no longer the color of the brave warriors. Dark blue was considered to be the most appropriate color as it attracted the least attention during combat. And, as you know, the fashion world often mimics military styles... so blue suddenly became in vogue! Additionally, it had recently been discovered how to create artificial blue clothing dye, which reduced the cost of blue-colored garments. And, as everybody knows, little boys are always associated with plastic guns and tanks, so it made sense that they assumed the color blue for themselves. On the other hand, little girls began to use the color pink as every little girl dreams of being a princess and pink still had strong connotations with luxuriousness and royalty.

Additionally, as pink was a paler color, it was cheaper to produce. So, from this moment on, parents started to dress their little boys in blue and their little girls in pink. But, fashion is always changing: if you think of the clothes your parents wear for example, you will probably realize that your Dad owns a pink shirt and your Mum has one or two blue dresses. Fortunately, the color of the clothes we wear nowadays has little to do with our gender – we simply pick what we like and pay little attention to the modern rules that pink is for girls and blue is for boys.