Players in a football team 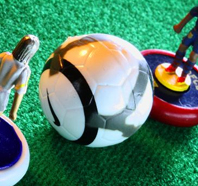 On many occasions during our free time we have wanted to play a game of football and have ended up with a number of players that doesn’t quite resemble the number that play in real matches: 5 against 5, 6 against 7….it all depends on the number of people wanting to join in. Even though a lot of the time the number of people isn’t correct it is still always a lot of fun and set plays work out alright. Why, then, is it necessary for a team to have 11 players?

The truth is that the official number has changed numerous times over the years. In “Calcio Fiorentino” (an ancestor of the football we know today) each team had…wait for it…27 players, of which 5 were goalkeepers! The funny thing is that they played on a pitch with dimensions similar to the pitches of today: meaning it must have resembled something similar to the chaos and disorder often seen in the dressing room for the school nativity play at Christmas.

With time and the arrival of the sport (then known as Medieval Football) to England, the rules changed, but not much. Teams were accepted with a number of players that varied between 15 and 21. We assume that, in the situation where two teams of differing numbers of players were to play against each other, the team with more members had to leave some on the bench (it is easy to guess who might win a match of 15 against 20 if not)

The big change arrived in 1870 with the agreement of the regulations that, amongst other things, established that there should only be one goalkeeper who stayed in a fixed position. Similarly it was decided that the number of players should be 11. The reason why this particular number was chosen is not exactly clear: it is believed that after many trials and tests the conclusion was reached that 20 players were enough to cover the pitch and to this it was necessary to add the two goalkeepers previously mentioned.

For other people the reason behind it is a lot simpler: the football team managers wanted their sport to be as popular as or more popular than the most famous at that time, cricket, so they copied the number of players.

It is also said that this number was established because in 1870 they also determined the rules surrounding football strips. For this reason they wanted to have a number of players that allowed clubs to spend the least amount of money possible on kits for the players but at the same time that the whole pitch would be covered sufficiently.

Football kits deserve a further mention: Did you know how long it was before they started to put numbers on the football shirts? No less than 58 years: in 1928 Arsenal’s Board of Directors decided that their players would wear numbers in order to easily identify them on the field. The method worked and it was decided to standardize it, but not exactly in the same way that it is today as at that time two players couldn’t have the same number on the pitch. This meant that the home team wore the numbers 1 to 11 and the away team wore numbers 12 to 22.

It was in 1940 when it was decided that no problems would be caused if a player on the opposing team was also wearing, for example, the number 7 (in the end, each team is wearing a different kit). But, the main players still weren’t allowed to wear a number any higher than 11. This changed in 1993, when it was first permitted that players could where any number at all as long as it did not exceed the number of players in the squad. It was in this year that they also began to put the players’ names on the shirts.

Yes, it is all a bit of a muddle, but it just goes to show that even sports have their history.