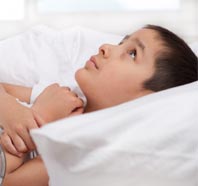 Before getting worried about our child’s sleep pattern we should take a moment to consider what a ‘normal’ amount of sleep is. Babies start to sleep for more than four hours at a time from three months old and they start sleeping for eight hours from around five or six months old. If they are sleeping for fewer hours than those established by this barometer then we could be looking at a case of insomnia.

This insomnia can often manifest itself as difficulties sleeping alone, with awakenings during the night or being a very light sleeper. As you can imagine, it could have something to do with any sudden change in the child’s routine such as moving house, a new baby brother or sister, a long journey, a nervousness that comes with learning to walk or even not being able to express the pain they are experiencing caused by the growth of new teeth

Once you have identified the cause of the problem, what is the best way to solve it? Much has been written and discussed when it comes to treatments for sleep deficiencies in children. What we personally would recommend is a rectification of habits: let your child sleep in their own bedroom as soon as possible, be assertive when it comes to establishing a bedtime for your child and don’t let them do things just before bed that could potentially excite them such as playing videogames or watching television.

We also advise the creation of an atmosphere that is conducive to sleep : a low light in the bedroom, an appropriate temperature (you could turn a heater on in the room a few minutes before they go to bed) and even , something which our own parents will have done at least once, tell them a bedtime story. This ancient and simple method has been proven to be one of the most successful: a story that helps to distract your child, told in a quiet voice in a relaxing environment such as a bed with a warm, snugly duvet.

Continuing on this theme, some experts recommend that you take a more ‘communicative’ approach to the bedtime story method aforementioned and turn the story into a conversation during which you encourage your child to tell you how their day has been or if they have anything worrying them at the moment. This way, you could also discover any underlying problems such as depression or anxiety attacks.

A lot of times insomnia is, more than a problem in itself, the manifestation of another. It is important that, as parents, we bear this in mind. Part of the solution is trying to take a deeper look at the things that could be worrying our children: if they can find a source of support and understanding in us then you will find their sleep improves. In this respect, in trying to rid ourselves of our worries so that we can get a better night’s sleep, adults and children aren’t all that different.