What should we ask Santa Clause for? 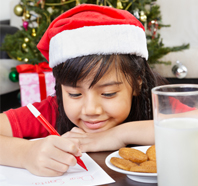 A lot of the time parents draw a blank and aren’t sure what to suggest. They get involved in the Christmas list and, of course, later the Three Kings and Santa get confused and bring things that either aren’t suitable or that the children don’t like. For this reason, we have made a list of recommendations that you should bear in mind when the time comes to point out certain toys in the catalogues or to write the e-mail to Lapland or the Orient.


It isn’t much advice, but we think it could be very useful to both children and parents. You don’t have to follow these instructions right down to the letter but, even if you use them as guidelines, this year’s Christmas List could turn out to be quite concrete with regard to what it includes and therefore save the time and energy of those who are bringing the presents.