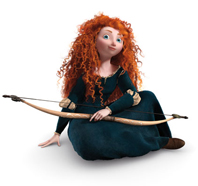 We were all looking forward to the release of the new Pixar animated movie (yes, we admit to it). The directors, screenplay writers and animators that took us to the future, to the bottom of the sea, to a toy store or to the most remote spot in South America are taking us this time to a the fairy tale times in which the Celts wandered around Scotland.

In these places lives Merida (who has nothing to do with the city in Extremadura), a redhead princess that doesn’t want to hear a word about her destiny: her mother wants her to be the typical boring princess, just awaiting the arrival of her prince charming. But Merida is screaming for some action: she wants to be a warrior princess, brave and combative. In other words: she wants to defy her destiny.

For that purpose, she doesn’t doubt joining forces with magical creatures that will allow her to outwit her destiny and the suitors that the rest of the Scottish clans want for her. Nevertheless, the idea of growing to be someone on her own can have some inconvenient whenever magic is involved. Will we see Merida turned into one of the Disney princesses that are sold in stores, then? Probably so, but at least we will have the knowledge that times have changed and now even princesses can handle swords or use a bow as good as (or better) than any warrior from the Highlands.

Those who have seen the film have mixed opinions on it. On the one side, there are those who think that this is a great movie, and that many messages and lessons can be learned from it (in other words, that it keeps up to other Pixar stories). But others think that it is a great movie, but not as good as "The Incredibles", "Finding Nemo" or "Up!". What we can say is that you see for yourselves. We are sure that you will like it... and that your older sister will love it.

How can we help you?Speak with an advisor for personalized attention
Receive Information
“May Joke”
The thief
[Read joke]