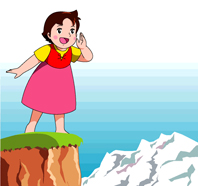 Even though we haven’t read her books nor watched her TV series we all know who our character of the month is: a Swiss girl that lived in a house in the Alps with her grumpy grandfather, and that used to go with a shepherd called Peter to take his goats to the mountain. It is also possible that characters like Clara or Miss Rottenmeier ring a bell...

It seems like Heidi has always been there... and the truth is that in a way it has been so. The first appearance of the girl wasn’t in a film or a TV cartoon series... it was on a book that was edited in 1880! Now you understand why Heidi is known to your older siblings, your parents... and even your grandparents!

The girl from the Alps was born from the imagination of the Swiss writer Joanna Spyri, who wanted to show the young people values like innocence and respect for nature. Spyri wrote the first volume of Heidi’s adventures when she was 53 years old, so it’s surprising that a grown-up woman, who should be a disillusioned person already, offered the world a story of an optimistic and lively young girl. It has been said that Joanna was a nostalgic person who spent her childhood almost like Heidi (in a mountain village surrounded by forest), and decided to put her memories down to paper.

The book was a great success, so much that she had to write a second part to be published in1881, barely a year after the first part’s release. Around 1885 both parts were published as a single book. That is the version that we all know.

With time, Heidi turned into a famous character in the whole Switzerland, so much that she is now some sort of national symbol. In one of the Swiss regions, Landquart, there is even a park where one can visit representations of some of the novel’s passages, and even a reconstruction of Grandpa’s hut! By the way, a quaint fact on "Heidiland": most of the visitors are Japanese tourists that grew up with the animated TV series.

And now that we speak about the TV series: do you know it was first broadcasted in 1974? A long time has passed since, but it is still broadcasted with great acceptance. Some spectators even watch it again when they are grown-ups to discover other stories inside the plot. For example, one of our redactors recalls the episode in which Heidi’s aunt takes her back to Frankfurt after threatening the Grandpa with telling everyone something about his past... what a soap opera!

Whatever the case, Heidi has become a part of our lives. Many even wonder what could have been of her after growing up, like: would she marry Peter? Would she have children? Well... you must know that there is answer to this. They are hard-to-find books, but a writer called Charles Tritten published a couple of novels called "Heidi grows up" (in which we see the girl in her adolescence) and "Heidi’s children", in which we discover that Heidi has grown up to be a school teacher and has her own kids. If you ever get your hands on one of these books, tell us what happened with her, we are dying to know!

How can we help you?Speak with an advisor for personalized attention
Receive Information
“May Joke”
The thief
[Read joke]