Why are there four seasons in a year? 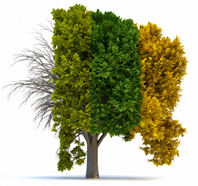 Spring is followed by summer, summer by autumn, and autumn by winter. It is like that every year and we are so accustomed to it that perhaps we haven’t even paid attention to the fascinating phenomenon of the seasons. Why do they happen?

As everybody knows the earth revolves around the sun (orbit) and also around itself (passage). This imaginary axis which goes through our planet isn’t straight, but rather inclined a few degrees (this is why the globes that you have in your rooms or that you see in class are "crooked"). So, whilst making passage and rotation there always has to be an area of the world which is closer to the sun than another. As you can imagine the area closest is warmer and the one furthest away is colder. You could say that the seasons are due to a gradual cooling. It's like when you get close to the heater at home: if you move further away it gets colder.

So then, why are there special days which mark the beginning of the seasons? There are four times of year: winter solstice, vernal equinox, summer solstice and autumnal equinox. They are quite complicated words, right? We are going to explain what they mean.

The equinoxes (of autumn and spring) occur when the earth’s axis is "straight" and the suns rays fall directly onto the equator. This takes place towards the 20th of March and the 22nd of September. This means that although the temperatures are mild, another part of the world tends to be cooler due, once again, to the tilt of our planet and the (non-circular) elliptical orbit moving around the sun.

This is, in summary, the reason why we distinguish between the four seasons. Although you already know that in many countries between Ecuador and the tropics there are only two seasons: dry and humid. But this is another story. As always, we invite you make your own discoveries. You will find the facts fascinating.