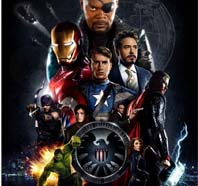 When the world threat is so large that not even a superhero can save the world what can we do? The answer is easy: unite various superheroes!

This is the approach of this spectacular film in which the most representative Marvel heroes (Iron Man, Captain America, the Incredible Hulk, Thor, the Black Widow, Hawkeye) are recruited by S.H.I.E.L.D agent Nick Fury with one objective: to save the world…and in the case that this can't be achieved…avenge it!

They say that the film encompasses everything needed for it to be successful: loads of action, massive special effects, an elite cast (Robert Downey Jr., Scarlett Johansson and Samuel L. Jackson), a capable director like Joss Whedon (creator of "Buffy the Vampire Slayer") and the promise of conflict even on the goodies side (remember that Marvel has always been characterised for its tormented characters that even fight amongst themselves). You could watch it with your dad, your mum or your older brother.

Truthfully, we don't know if it will be great or just average. But it promises to be epic and a good way to spend a Saturday afternoon, which is what it's all about. Of course, we take this opportunity to recommend the original comics that this movie is based on, of which there are many (the first ones date back to no earlier or later than 1963).