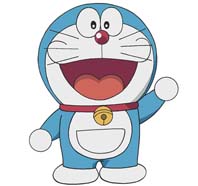 There are robots produced to help humans, others designed to fight and save the world…and then there's Doraemon, who has been programmed to have patience with Nobita. Anybody who has read the stories or seen the series has thought at least once that the poor gadget cat deserves a better owner, someone more mature and who will cause him fewer problems. But if it were that case…who would be the source of his adventures?

Here you see a blue and white robot, in the form of a cat without ears and with a pocket in his tummy which exceeds the capacity of Mary Poppins' bag. He was born in Japan in the year 1970 from the hands of his designers Hiroshi Fujimoto and Motö Abiko, who at the time still worked under the group name Fujiko F. Fuji.

At first he was a manga (Japanese comic) character, put he became tremendously popular over the following four years which included his leap onto television screens. The first Doreamon episode was broadcast on the 1st of April 1973. The story of the series is the same as the manga version: Sewashi, the grandson of Nobita, sends his robotic cat from the 22nd century to the 20th century on a complicated mission: to correct the errors of his grandfather in order to avoid his descendants living in poverty.

If you are followers of the series you will know that nothing is easy: Nobita is a bad sportsman, bad student and bad worker, his only concern in life is to escape from Giant and Tsuneo (who always get him in trouble) and try to win over Shizuka, the girl he is in love with. Doraemon tries to correct this by making use of his most strange and curious futuristic objects, but Nobita always ends up using them for his own benefit…which ends up creating more problems.

As we said before, fortunately Doraemon has more patience than a saint. And proof of this are the 2163 episodes of the series that have been broadcast up to now. Yes, 2163 with no sign of stopping. But we have something to share with you (which I am you have been waiting for us to comment on): Deoreamon doesn’t have a final episode. Nor does its manga version, which went out of print in 1996 after one of its creators, Hiroshi Fujimoto, died without leaving indication of how the story would end. It was decided that the manga would have no conclusive episode, although you have to recognise that in 1971 and 1972 there were some attempts made to give it a conclusion, however due to the success of the manga version, the story resumed after these chapters.

We are also glad to tell you that the rumour stating that the ultimate episode of Doraemon tells how Nobita is in fact a hospitalised child with no friends and who has dreamt all of her adventures is false. This rumour was started in Japan and was completely denied by the producer herself. So one day if one of your classmates or cousins tries to be clever, please tell them that Doraemon will still be recharging his batteries for a while.

We’re not exaggerating: his energy doesn’t run out. Not only is he one of the most recognised Japanese animated cartoons, he has also been named ambassador of Japanese culture, has participated in charity shows…And has even been proclaimed as the "cutest" hero in the whole of Asia! And all despite the problems that Norbita caused him…the one getting all the limelight is one of your own machines?