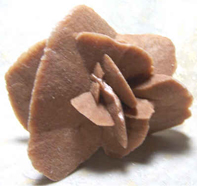 When we mention the "sand rose" we are not talking about a plant, although by what you see in the photo you could think that it is a flower. It really is a rock. Maybe you have seen one (we all have a cousin or an uncle who collects rocks and minerals) and it is very possible that he has told you some legend that said that this curious object is actually a petrified rose. But you have to know that this is just a lovely and enchanting story, a sheer legend.

The "sand rose" is a sedimentary detrital rock. Like that, it sounds a bit boring, but all those words mean something fascinating: that it is formed when plaster, sand and a bit of water mix together in desert areas. And in which areas of the desert are those conditions given? It seems that most of them come from areas that are former seas or salty lakes that were filled up with sand. This way, the salt water salts that remain after the evaporation of the water mix with the sand and rise to the surface in the form of crystals.

Its shape, resembling a rose, is due to the fact that it is made up of different plates: if you look closely you'll find out that it is the sum of cookie-shaped pieces. Those pieces are the crystals that stick together and give the sensation of being petals.

If you ever get your hands on one, you have to think that, even though it is a rock, it is as fragile as one of the flowers that give its name to it. This is because its main component is sand: so be very careful and make sure that it doesn't get covered in dust or gets wet, for it could end up crumbling down.

This is the real origin of this special rock, one of those that don't seem to come from the insides of the Earth, but from a wonderful fantasy garden. Is this why everyone wants one of their own?