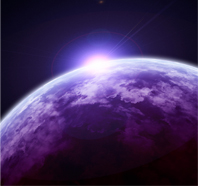 Accustomed as we are to science-fiction films and novels it's easy for us to think that there are many other planets like ours. We're not necessarily saying that extraterrestrial life could exist (this is a completely different kettle of fish) but that there are planets adapted for life as we know it.

The fact is that the universe is very big; there are large areas of nothingness and if it is already a difficult task to locate planets that are orbiting around other stars imagine trying to find someone who lives under the same conditions as ours.

A hypothetical "earth 2" should not only have an atmosphere composed of just the right amount of oxygen (a little less and the air is not suitable to breath, a little more and our lungs would be damaged); it must be a suitable distance from a star (a slight deviation and it would either be too cold or too hot); also it should have an electromagnetic field that blocks harmful radiation from the sun; of course it would require water in liquid state; and even a satellite which orbits around it (the moon "stabilises" the rotation of the earth making sure that the temperature of the planet stays more or less the same). The slightest variation in any of these details and life would be impossible.

Many scientists refuse to give up and continue the search for our twin planet. But the data, at the moment, is not very encouraging: the two most similar planets to earth (recently discovered by NASA) are 945 light-years away from us; they orbit a star called "Kepler 22" and are called "Kepler20e" and "Kepler 20f". "2e" has a diameter 13% smaller than earth and "20f" is only 3% bigger than our planet; both have a solid iron core, therefore they could have a magnetic field…but their average temperatures are 815º for 20f and 426º for 20e (remember water boils at 100º).

However this still leaves a lot to be revised. Many people are convinced that we will end up making contact with a planet similar to our own. And when we say "similar" we mean "having the least number of differences possible" such as red seas, but in which you can still fish; blue grass you can have picnics on or a golden sky which makes every sunset a spectacle, but which we can enjoy without having to wear an oxygen mask.

So now…when this happens, when we have a second earth, what will we do then?