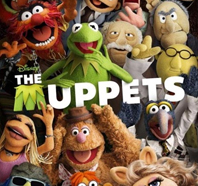 As you know they have provided many years of entertainment for the young and old, at least in the US. So it's no surprise that they have fans that are over 30 years old...and the theatre they acted in is falling to bits.

These points form the main reasoning and plot behind the film: the Muppets theatre is already old, deserted and on the brink of being demolished. The sinister owner of a petrol company wants to make the most of the situation in order to drill holes in the ground and extract all the petrol that there is underneath.

However Gary, Mary and Walter, three of the Muppets biggest fans will do everything possible to make sure that this doesn't happen. So they decide to organise a magnificent spectacle from which they will make the 10 million dollars necessary to save the theatre. There is only one problem: their favourite characters aren't what they used to be, some have abandoned the world of show business. So they will have to convince them to return to the stage whatever the cost.

We expected a film packed with crazy adventures and fun for all the family. So if you're on the hunt for a film you can take your nostalgic parents to see at the cinema, no doubt about it: this is the one for you.