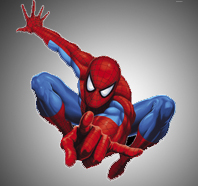 And it's true that, although he seems eternally young, Peter Parker is already 50 years old. Of course everything imaginable has happened to him: he has been confronted by the most dangerous villains, has taken part in wars in other dimensions, he got married; he's even come face to face with a clone. He should be old and married…but for him the years have no effect.

Spider-man was born in 1962 when the fictional screenwriter Stan Lee was searching for a new character with which he could replicate the success of "The Fantastic Four" and "Hulk". Lee knew that he wanted a young character that the majority of Marvel comic book readers could relate to. He wouldn't be a particularly successful young man, such as captain of the football team who is very popular and cheerleader girlfriend. The story would centre rather on a tormented person, a timid boy for who many things go badly until he becomes a superhero (Stan Lee's home brand). That's to say, someone that could quite easily be any of us.

The editors didn't have much confidence in this kind of superhero. However the first issue of his adventures sold very well. The secret of his success was precisely the "nerdy" character of Peter Parker and the fact that his life changed radically for the worst by believing himself to be "the best in the world": converted into an international celebrity he failed to stop a thief because it "wasn't his job". However it would be this thief who destroys his life by murdering his uncle Ben. From then on, feeling guilty, he decides to fight against the bad. As much as he dressed up in disguise and had superpowers Spiderman doesn't fight the baddies because he believes in the good or for revenge: he does it to overcome his feeling of guilt. This makes the story much more complex and believable.

Making the story even more believable are the many problems which he has to face: a villain kills his girlfriend, his auntie cannot find out that he is a superhero because she is afraid of Spiderman, his work is very badly paid, he is unable to make ends meet and keeping on top of his fight against crime doesn't allow him enough time to study and pass his exams. Never has the life of a "goody" been so bad…there are many occasions when Peter Parker has considered giving up and hanging up his spider suit.

This is the essence of Spiderman, and it should never change even though his adventures have become more and more strange and despite the fact that they are determined to remake them with clones, alternative worlds and new universes. What is important is that Spidey could quite easily be a friend we wouldn't hesitate to give a hand to.