Is the colour orange named this way because of the fruit? 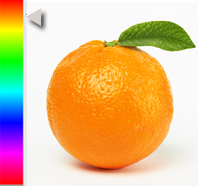 You surely have asked yourself this question sometime in front of a glass of juice or in front of a plate with pieces of orange. No one had a straight answer and, most probably, the whole thing ended up in a small discussion between your parents and your grandparents. Well... the next time that this happens you will be the one with an answer. Pay attention: it is just a theory, but it is starting to prevail.

Let's start with the fruit, that in the Middle Ages was considered to be something exotic, and a subject for study: thus, the philosopher and scientist Alberto Magno called it "arangus", a Latin version of the name "nãraga", that was how oranges were called in Sanskrit, an ancient language of the India (remember that oranges come originally from East Asia). From that word, "arangus", comes its name in English, French, Dutch and German. Surprisingly, the Spanish and Portuguese merchants called the fruit by its original name, which through time would turn into "naranja" and "laranja".

Very good, we now know the origin of the fruit's name. How did it turn into the colour's name? The colour already existed but, according to ancient chronicles of medieval England, it was called "geoluhread", which meant something like "yellow-red".

It is quite a complicated explanation, we know... but it is the most accepted. Summing up, we could say that the colour had a far too complicated name, so people decided to call it like the fruit because it was easier. Now, it's only about what came first, the egg or the chicken. Some of our team mates are already down to research, so we will tell you all about it when we unveil the secret.