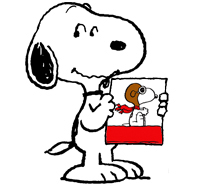 Who wouldn't want to have a dog like Snoopy? Intelligent, loyal, sensitive, aviation fan... and that lives for a very long time. You would never say it, but Charlie Brown's dog is 62 years old!

His first appearance was on October 4th 1950, two days after the first Peanuts' cartoon was published. In fact, Smoopy is older than other characters in the strip; for example, Lucy, the know-it-all brunette girl in a blue dress, and her brother Linus, the one with the blanket, would arrive in 1952.

Nevertheless, Snoopy's evolution was a bit slower than the rest of Charlies' friends': in his first appearance it was a perfectly ordinary dog. It wasn't until 1958 that his thoughts appeared on the strips, and then in 1959 it started walking on two legs, and in 1965 he used his typewriter for the first time. What's been a constant since the first day is its funny habit of sleeping on top of his kennel instead of inside of it.

This means that the dog is an example of something that happens to some characters: that they come to life without even knowing why. At first, Snoopy was going to be a secondary character. Snoopy wasn't even going to be its name: Charles Schultz, its creator, was going to call him "Sniffy", but when he discovered that another comic character had that name, he decided to call his dog Snoopy, a more American way of saying "Snuppa", the name his grandmother wanted to give to her third dog. But, with time, he grew to be the most popular character in Peanuts, even surpassing the main character, Charlie Brown, in popularity. A proof of it is the number of toys, clothes and accessories in which it appears; he even got to be the image of an insurance company! Snoopy represents a positive, imaginative, optimistic and kindhearted intelligence that connected with everyone.

But that also had a negative counterpart for Snoopy: its face appeared on so many fashion articles that it ended up turning, at least in Spain, into a symbol for superficiality and squander. Maybe you don't remember this but, until not so long ago, when someone pulled off an imitation of the typical preppy girl, one of the quotes would be "I swear it on Snoopy". Fortunately enough, those times are long by and the character has regained part of its original identity.

That's what you should remember: if you like Snoopy (we recommend that you read its adventures), that means you are a dreamer and, above all, a very good friend of your friends.