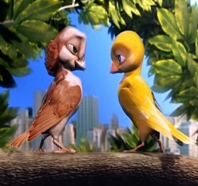 Have you ever noticed the amount of sparrows in city centers? Many people, because of seeing them too often, consider it a vulgar bird. That's just Juan's case... that he is precisely a sparrow. In his effort to stand out from all the other members of his flock, he has an accident that turns him into a curious multicolor bird. At first, everything seems perfect, but what will Juan do when he finds out that he has awaken the greed of bird collectors? Thank God that Feifi, a beautiful canary, is willing to help him out. The counterpart is that she has problems, too: she has just escaped the cage where a computing magnate kept her, and freedom is a new thing for her.

At least they both have friends like Libia the pigeon, Pipo the hummingbird and Clarita, the bat. Of course, they too have to deal with some problems in the shape of hungry cats and some very moody lapwings. Will this peculiar gang manage to overcome so many difficulties? Of course they will, and meanwhile they'll make us have a blast time.

Maybe this movie rings a bell from some time ago. Everything has its explanation: even though it was released in 2010, it hasn't been shown in Spain until now. But, as some say "it's better late than never". By the way, if no one can come with you to the cinema and only your older brother, the computer specialist, is available, you can talk him into coming with you to watch "Free Birds" with an argument he will love: the film is 100% made with free software tools. If that still doesn't convince him, well, tell him you are going to watch a good story!