The ox and the mule in the Nativity Scene 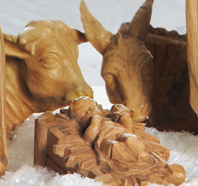 The ox and the mule are possibly the most likeable characters in the Nativity Scene. But, there is something strange surrounding these two: we are unsure as to why they are there. We know the significance of the shepherds, the Romans and the angels, why the Wise Men are there and, of course, why the Baby Jesus is in the centre, but these two animals…

It is taken as a given that they are there because, if they were not, we might not know that where Christ was born was in a manger and not in a house. But, bearing in mind the symbolism that surrounds the Nativity Scene, is this explanation enough? Many people don’t think so and believe that if they are an ox and a mule, and not a pig and a cockerel, then that is for a particular reason.

The problem lies in the fact that there no writings or documents that explain the reason with any form of clarity. Because of this, as is often so in these cases, there are various theories. Let us share some of them with you:

There are many more theories surrounding this, but these are some of the most interesting and most cited. However, we continue to prefer the most traditional tale explaining their presence in the Nativity Scene, and this is how it goes:

….An old peasant decided to sacrifice the old ox and the elderly mule that he owned because they were no longer able to be used for work. However, the night before the day on which he was going to kill them, the poor beasts, knowing the fate that awaited them, bolted from their stable. They roamed the streets until they came across a manger inside which they saw a couple with a shivering baby. The animals took pity on the little thing and decided to heat him up a little with their body heat and their breath. As you can imagine, that tiny baby was Jesus. Subsequently, God, who was very grateful for their act, made the animals young again, who then returned to their old stable and gave their owner a big surprise.

Did you like that story? Well….now you know a lot more than most older people when it comes to the ox and mule, so you can tell them this tale when they are looking at your Nativity Scene at home.