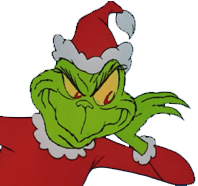 This month’s character is another one of those beings who is mentioned in the Christmas episodes of many American TV series, but that few people from Spain really know what he is. Sure, a few years ago Jim Carrey played the leading role in a film about him, but what about those people who didn’t watch it? If you happen to be one of them, I am going to tell you just who this much feared “Grinch” is.

This being is a type of grumpy, hairy, green gremlin, with a heart “two sizes too small” (meaning, that he really is quite evil) who became fed up with the good cheer and happiness of people at this time of year and decided to steal all of the decorations and presents from the inhabitants of Whoville, believing that this way Christmas would never come. But, despite his efforts, in the end it still came, making him realize that this time of year is about something more than gifts and adornments. This sudden fit of kindness made his heart grow bigger and in the end he gives back all of the things that he has stolen.

The story is more modern than most people think as it was published in 1957. The author was Theodor Seuss Geisel, better known as “Dr Seuss”, a children’s writer and illustrator very well known in the United States, who, incidentally, was born in a city called Springfield (the same one where the Simpsons live perhaps?)

The character of the Grinch was born when Dr Seuss decided to write a tale which poked fun at all those who see Christmas in a more commercial way than spiritual. So, the “Grinch” represents all the greedy people only concerned with getting presents and money. As the story goes, when he drew the creature he based its features on an old classmate who was selfish and unpleasant (what a way to go down in history); in fact, in English “grinch” is a synonym of “grouchy”, which in Spanish is translated as “gruñón”.

The story quickly became famous (they do say we prefer the baddies to the goodies). The popularity of the character grew in 1966, when the story was transformed into an animated film narrated by the one and only Boris Karlof, an actor who specialized in horror films. It is this film that made the Grinch internationally famous as it is the one, out of all the North American TV series and films, that children watch at Christmas time. It isn’t a coincidence, or even an attempt to sell us the film: it has truly been shown so many times that in the United States it is now as typical as singing carols or putting up the Christmas tree.

But, if we were being honest, we should tell you that this character is not only typical of Christmas. In 1977, in response to a multitude of fans who wanted more Grinch stories, Dr Seuss decided to write a script for a Halloween film about him. Well thought out, it seems much more logical to see a creature such as him on Halloween night.

So now you know a little bit more about this character. Fortunately, we live very far away from the United States of America and so it is very unlikely that he will steal our Christmas presents. But, it is never a bad thing to know where these creatures come from.