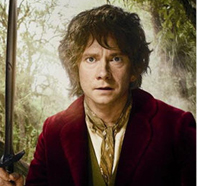 You probably already knew, but just in case you didn’t, we will clear it up: this film is not a sequel, but a prequel (a previous story) to “The Lord of the Rings”. In this film we follow the adventures of a young Bilbo Baggins, who leaves The Shire to join a team whose mission is to free Erebor, the dwarf’s mountain, from the claws of the dragon, Smaug.

In the same way as “The Lord of the Rings” the cinematic version of “The Hobbit” is to be divided into three parts that will be released this year, in 2013 and in 2014. What concerns us this month is the first part, the part that usually serves as a means to introduce us to the characters and give us an idea of the adventure. Bilbo receives a visit from Gandalf (who at that time is an unknown). The wizard tells him that he has been chosen for the aforementioned mission together with thirteen elves. So….what is a quiet and simple hobbit doing saving a kingdom? The answer is easy: having the adventure of a lifetime.

We have had to wait a long time in order to see this film, nearly twenty years in fact. We aren’t even joking: the director Peter Jackson had already started thinking of adapting J.R.R. Tolkien’s book in 1995 His idea was to follow the chronological order established by the author: first we would see the “Hobbit” films, followed by “The Lord of the Rings”. The plan failed due to the fact that another production company, and not the one of Jackson, already had the rights to the “Hobbit”, so they filmed “The Lord of the Rings” first instead. With time the problem was solved and in 2003 everything seemed ready to go ahead with Bilbo’s story with Peter Jackson as producer and Guillermo del Toro as director. (You may have seen his films Blade II, the Hellboy series and Pan’s Labyrinth), but then there was another problem, the production company went bankrupt and Del Toro abandoned the project.

It has been a long, hard wait, but finally the time has arrived. We can now go to the cinema, buy our tickets and let ourselves be taken away again to Middle Earth. Old friends await us there as well as the odd enemy (Yes, Gollum and Sauron also make appearances in this film). So, get ready to travel to incredible places, to fight dragons and trolls…..and to enjoy a great adventure.