They are one of the most terrifying natural phenomenons: funnels which fall from the sky, sweeping the earth at high speed and destroying everything in their path. We are talking about tornados. 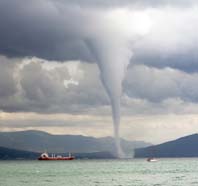 They fascinate us: we see on the news how they devastate whole towns, we know that there are people who dedicate themselves to "hunting" them, we have even seen films about them. But, how do they form?

Tornados are born from storm clouds. As you know the clouds are formed by the evaporation of water, what is not commonly known is that the evaporation of water creates energy: vapour, on condensing releases heat (calculated as approximately 600 calories per gram of water). So it is calculated that inside a storm cloud there is 10.000.000kilowatts produced per hour (taking into account the fact that a house only consumes 1.500 watts of electricity per month).

To this phenomenon you have to add the air temperature: the air gets colder as it ascends; as a result a storm cloud will be warmer on the inside than the outside. The warm air has to move upwards and the cold air downward, in this way it begins to move and create wind. Just imagine the amount of energy needed to create this wind.

The ascending current sometimes causes a low pressure zone beneath the cloud. It's as if there is a hole or for example like a plughole in a bath. It´s clear, the wind, with the energy that the cloud contains, escapes through this hole causing the tornado to form. The funnel that we see causes the circulation of air within the tornado to be faster than the outside; this generates a succession which has to touch the ground and takes its characteristic shape.

Of course there has to be very special conditions for a tornado to be produced. Because of this in some countries they never form. That being said, there is an area in North America called "Tornado alley" (between the Rocky Mountains and the Appalachian Mountains) where various tornados form every year. Fortunately there aren't many that are as destructive as those shown in films.

So now you know a bit about them. It never hurts to know why certain things happen and what to do if we ever came face to face with one...or to show off in science class.