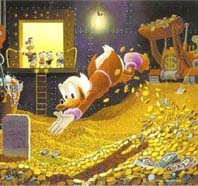 Uncle Scrooge (also known as “Rico Mcpato” or “Scrooge McDuck”) is one of the most famous relatives of Donald Duck. Who wouldn’t be famous if they had so much money that they could fill a swimming pool with coins and bank notes?

This character is one of those that appear to have their own life. His creator, Carl Barks created him one fine day in 1947 as an episodic character (so-called because they only appear once or as secondary characters in a story). However Uncle Scrooge had charisma: not in vain for his creation Mr. Banks based him on the infamous Mr. Scrooge from “A Christmas Carol” by Dickens and on the powerful Scottish millionaire Andrew Carnegie.

With these precedents how could you not become a notable character? Furthermore, to these models they added other characteristics: yes, Scrooge is grumpy, greedy, and mean and behaves badly with his nephew Donald but he is also an entrepreneur, adventurous and, most importantly, he started “at the bottom”. McDuck was very poor but he built his fortune cent by cent, pound by pound, until he became the richest duck in the world. You could say that they were also liked by the working parents of children who bought Donald comics (surely some of these parents would read the adventures of Scrooge and themselves dream of swimming in gold).

Of course, as a millionaire, Scrooge had enemies amongst which were competitors (Rockerduck), thieves (like the Beagle Boys) and those envious of his fortunes (like the magic witch, who thought that the money Scrooge first made had powers). As you already know having enemies when you are a comic-book character means that you enjoy having a new adventure everyday. Many of the most action-packed stories of Donald and his nephews begin when one of these villains is about to threaten his uncles fortune.

Unfortunately nowadays the figure of Uncle Scrooge is a little downcast: many consider him to be a bad example to children because of his stinginess and for representing the type of businessman who puts his money worries above everything else. However, throughout his many years we have learnt a lot about the positivity of saving money thanks to him. Discussions apart it is certain that we have all gone through the same developments as Disney’s duck family: when we are young we want to be like the nephews, as we grow up we understand Donald and when we get older we feel sympathy for Scrooge.