Halfway between "Star Wars", "The Chronicles of Narnia" and "The Lord of the Rings" is the film that we are recommending to you this month. No, it's not an attempt to copy the success of these other films. In reality the adventures of John Carter are actually older than those of Luke or Frodo. 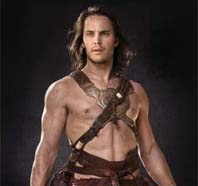 This character, a confederate soldier on entering a cave ends up being transported to war-ridden Mars, was created by Edgar Rice Burroughs (the same writer who gave life to Tarzan) in 1911. But 100 years passed before a film was made about him.

Look, when we say "Mars" we mean to talk about the planet: but not the one we have seen in typical sci-fi films, rather a "Mars" more like the world of Conan. Yes, there are green martians, but they fight with swords and spears rather than ray guns. The proof is in the image that we see: John doesn't wear an astronaut suit but clothing more related to that of a barbarian fighter.

Curious isn't it? We invite you to discover a new world that will surprise you as much as it will your brothers and fathers (I am sure at least one of them will know the old stories of John Carter if they are science-fiction fanatics).